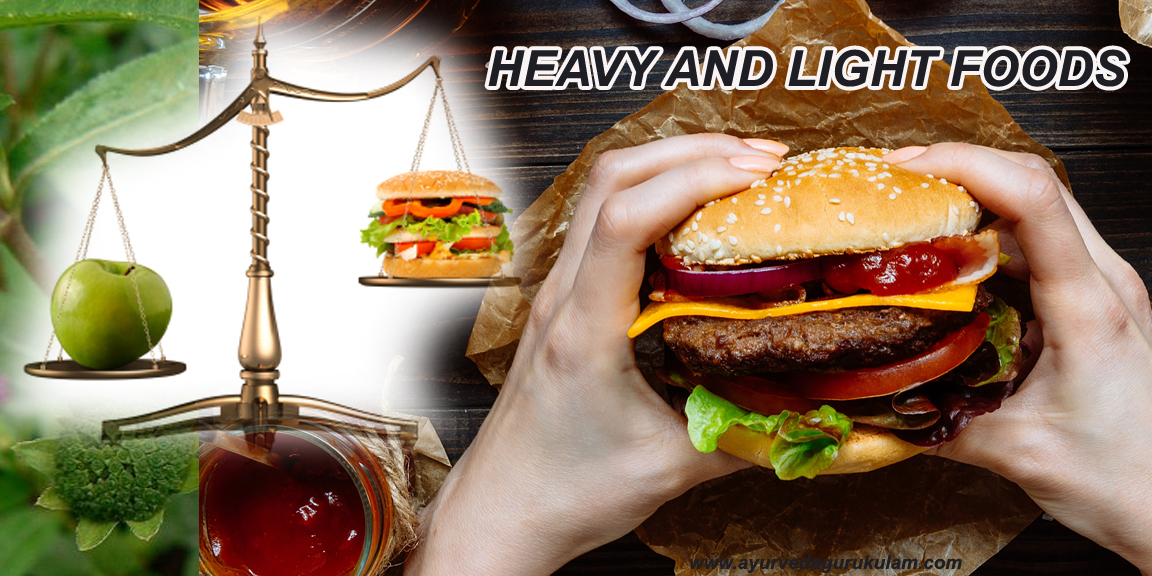 Generally all the foods can be classified into HEAVY and LIGHT. While talking about this concept a frequent doubt that arises in one’s mind is its actual significance. Whenever we eat food we forget that the food we eat should be digested to its basic molecules. Then only can it be absorbed by the system and later converted into energy. Thus  more than what we eat, it is really important that the things we eat gets digested properly. Its only then the proper biochemical reaction will happen inside the body leading to production  of energy. This process is known as metabolism. Here is where the concept of heaviness and lightness of food comes to play. Heavy food means that which takes long time to get digested and light  food means that which gets digested much more faster and much more easier than the heavy food. To understand its significance lets look into some scenario’s. Let’s say  a person has a definite digestive capacity, so there is an ideal amount of food which is suitable for that person but this amount of food is directly related to the heaviness or lightness. That is heavy food should be taken in less amount light food more amount.  Now let’s say that because of some reasons or disease’s the persons fire has declined. In this condition if you give the heavy food the digestive fire which is already weak again has to strain  a lot more further reducing digestive capacity of an individual.  To understand this let’s consider an example. Let’s say we need to make a campfire and we have  no fuel, so we can rub two stones to get a spark and with help of dried leaves or some dried coconut husk we can get a small fire, which wr slowly blow to further ignites it. Now into this small flame if we put a really big log into it what will happen to the small speck of flame will it burn brighter or gets extinguished?? It extinguishes. Instead if you are putting more dried leaves a little bit of small twigs the small fire grow steadily and becomes stronger, now even if we are putting a big  log it will also catch fire. The same thing happens in the body. When we think that, by eating something which can give us a lot of nourishment, it’s actually helping the body, but this may not be the case always. This means by understanding whether the food is heavy or light wr are able to understand whether it is suitable for our body or weather it is going to cause decreased digestive fire and cause metabolic  problems which can lead to a multiple number of diseases. So by understanding this we can ignite our digestive fire to its normal level to gain proper nourishment and energy.